​They then called a public meeting of citizens

Company.  The keys and title to the truck

were presented to the fire company.

(Hanging on the wall of the department’s

meeting and assembly room is a picture of

Carl Golladay, who was the Ruritan Club’s

president at the time, presenting the truck’s

title to Paul Plauger, the first president of

The executive officers met for the first time on March 23, 1964, to discuss committees, of which there were a total of six.  At the same time, the department had its first treasurer’s report showing a balance of $70.  A supper was scheduled to raise money for the Ruritan Club as well as for the fire company.  At the April 1964 meeting it was reported that they had made $275 from the supper and that 150 feet of hose, three nozzles, and one brass union had been donated to the company.

With no actual fire building, the truck was kept at the homes of the various designated drivers.  It could often be found in the open shed just north of the current fire hall on Seven Fountains Road then owned by the Edgar Shipe family (now Stanley and Karen Miller).  Another storage area was the unheated shed of Milton Dinges near the Fort Valley School.  Due to freezing the first winter, the truck’s water tank was drained, and water would be taken on after an alarm.  The telephone numbers of the drivers were given to the phone operator so that he/she could call them for an alarm.  In the event of a call the driver would take the truck to the cross roads (Fort Valley Road and Woodstock Tower/Seven Fountains intersection) and wait for enough members to show before proceeding to the scene.  The company met several times at Dale Jett’s garage (now the Fort Valley Country Store) for fire drills.

Several lots had become available for building the new fire station.  But a decision didn’t come until October 1964, when the company decided to accept a donated lot of 100’ x 163’ from Dale and Jeanette Jett.  At the November 1964 meeting, a 100’ x 115’ lot, which also joined the Jett’s donated lot, was donated by the Edgar Shipe family.  The company also voted on building plans of a 40’ x 60’ building with minor changes.

On Thanksgiving Day 1964 at 1:30 p.m. the Fire Company held its first turkey shooting match at Jim Keller’s store at Kings Crossing.  A profit of $46.99 was made.

At the company’s first annual meeting, held January 5, 1965, the members decided to become incorporated, which was to be handled by the Commonwealth’s Attorney Kermit Racey.  Construction of the fire station had been started and it was decided to move the fire truck into the new building, although meetings were still being held at the community building (now the Fort Valley Museum).

In March 1965, at the request of the U.S. Forest Service, the company agreed to sign a contract to help fight forest fires.

At the April 1965, meeting, the Ruritan Club made an offer to the fire company.  The Ruritan members voted on a budget for the purchase of equipment for the kitchen and dining room of the fire hall, providing it could be used by the club as well as by other community organizations.

The May 4, 1965 minutes reported the first President Paul Plauger’s passing.  Within the first three years of operation the department also lost two other members:  Dick Grandstaff and Ed Tamkin.

Finally, on April 17, 1966, the fire company held a dedication of the new firehouse. The Master of Ceremonies was Leroy Tamkin with Russell Rinker doing the ribbon cutting (a picture of this ceremony currently displayed in fire hall).  At this time the company had 49 members.

The first Fort Valley Volunteer Fire Company Ladies’ Auxiliary was being formed in June of 1966.

On July 5, 1966, a tract of land measuring 100’ x 350’, located at the rear of the fire company lot and the rear of Elmo Mantz’s land, was donated by Edgar Shipe and members of his family.  This tract of land currently houses our pavilion and barbecue pit.  Several more tracts were added over the years to the first three:  the front lot between the emergency entrance and Stanley Millers was purchased from Robert Benton; the tract purchased from Elmo Mantz currently houses the Woodstock Rescue Squad substation; the lot on the hill next to Steve Snyder was purchased from Fleta Shipe Ritenour; and the lot with the brick house which is currently used as a residential rental.  These seven contiguous tracts make up the real estate holdings of the fire company.

By 1972, with public fundraising dinners getting larger and more bays needed for emergency equipment, the company had outgrown the original 40’ x 60’ building.  In 1973 a 50’ x 60’ two-story masonry addition was added, providing a large upper meeting room and four emergency bays level with Fort Valley Road, creating better emergency access.  Along with this expansion the small rear kitchen was expanded into the south half of the original 1964 building and soon after a rear wrap around porch housing a commercial walk-in cooler/freezer was added.

Throughout the years of the department many auctions, carnivals, parades, shooting matches and other fundraising events took place.  In 1970 the fire company entered its first Apple Blossom Parade in Winchester, with Robin Neal being the first Honorary Fire Chief.  By then, the company had three fire trucks:  Unit 14, Unit 14-A (tanker), and Truck No. 3.  In 1970 the company purchased its first emergency generator, which has recently been updated by a donated generator from Falls Church.

The company began with a total of 71 members, and today the department has a total of one junior member and 67 regular members, with one regular member, Chester Ridgley, Jr. currently serving in the armed forces.

The department currently has four units of emergency apparatus:  Tanker 14, Pumper 14, Mini 14, and Mobile 14.  The new mobile was part of the RSAF and we are grateful for their help in purchasing this much-needed unit.  Because Fort Valley does not have fire hydrants, water must be pumped from creeks or ponds (where we currently have two dry hydrants set up), so it is crucial that we have the help of our neighboring companies to assist in the event of a large house or forest fire.

Many years ago, the department offered the use of the building adjacent to the fire hall to the Woodstock Rescue Squad.  The building was named the Fort Valley Substation and currently houses Ambulance 5-7 and our new Mobile 14.  With the proceeds of raffles held in 2003 and 2004, the department was able to purchase two Honda Rancher 4WD 4-wheelers for search and rescue efforts.  A trailer specially made for the 4-wheelers was purchased to help with these efforts.  These raffles have coincided with our ham and oyster suppers.  These suppers have been going on for many years, with many volunteers helping out and people coming from far and near to enjoy a wonderful meal.  The volunteers are not only Fort Valley residents; they also come from all over to help out, among them the Sheriff of Shenandoah County and other elected officials.  Many help by baking homemade goodies for desserts, helping peel potatoes, prepare oysters, serve food, and many other jobs that need to be done the entire week leading up to and including the day of the supper.  These suppers are generally held on the third Saturdays of March, April, October, and November.

In 2006 the Fort Valley 4-H Fire and Rescue was established.  Wendy Bulatko & several other leaders run this.  It has had various number of members throughout the years.

The department today, along with the large meeting room available to the public for a multitude of functions (such as Fort Valley precinct elections), successfully operates due to a close and caring Fort Valley community.

As of March 2014 the Fort Valley Volunteer Fire Department is still run by all volunteers.  It had 86 members.  Out of those 86, eight are probationary members, 3 are junior members, and 23 are life members.  We also currently have 19 certified firefighters, 17 EMT-B’s, 5 EMT-E’s and 2 EMT-I’s. 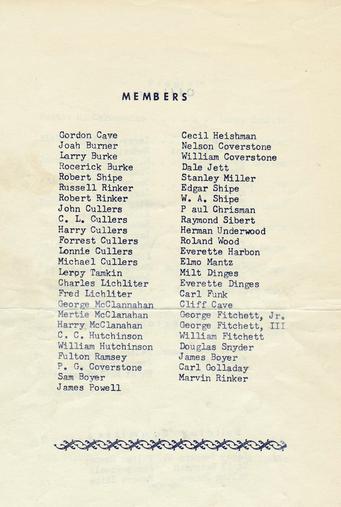 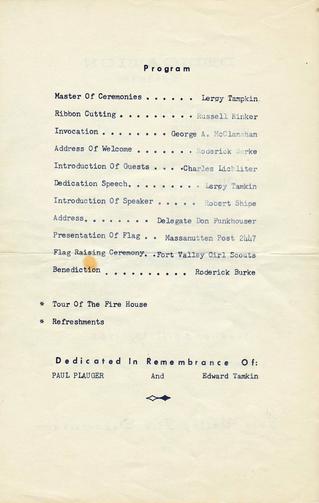 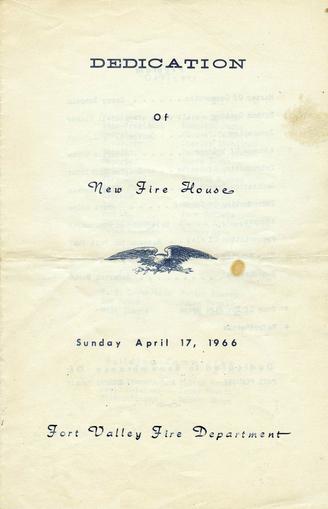 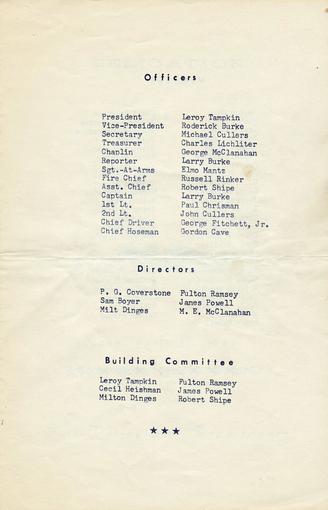 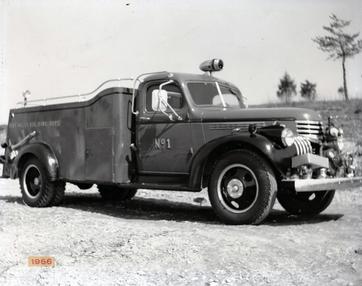 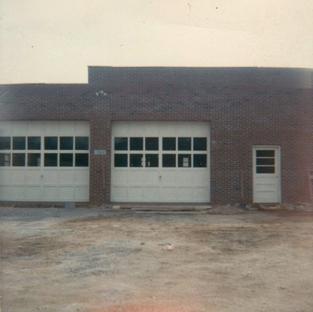